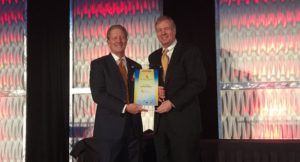 The Industry Leaders of Arizona Awards recognize the contributions and impact of Arizona‐based companies on both the economy of Arizona and in the communities they serve.

For 2017, companies were selected from these five key industries: Commercial General Contractors, Education, Entertainment, Financial services and Technology. Community impact, innovation and founders awards were given out.

Here are this year’s Industry Leaders of Arizona Awards winners:

Markham Contracting is vigorously involved in project safety and prides itself on having performed more than 1 million hours with no lost time incidents. Markham provides clients with a full civil/construction package including pre-construction, construction and self- performing work. Markham’s culture that “our name is forever on each project we build” strengthens its commitment to collaborate with clients during a project’s pre-construction and construction phases to minimize issues.

While other universities are cutting budgets, eliminating programs and raising tuition, GCU is investing $1 billion over a 10-year period in academic programs, technologies, classroom buildings and laboratories. This includes two STEM buildings, a music recording studio and a 152-room hotel that serves as a training ground for its hospitality management students. The university also added academic programs in emerging growth fields.

The Phoenix Symphony’s Education and Community Outreach programs reach over 125,000 children and adults annually with priority given to Title 1 designation schools. No other performing arts organization in the state has the proven track record for providing cutting-edge music education and music wellness programs of such great breadth and depth.

Canal Partners has successfully created significant value in both public and private enterprises utilizing its managers’ entrepreneurial and operational experiences in creating value-added growth. Many of the products and services that Canal has invested in are revolutionizing their respective industries through the use of cutting edge technology and proprietary products and services.

Microchip Technologies is the semiconductor industry’s greatest Cinderella Story, having come a long way since it was a failing spinoff of General Instrument in 1989. Since then, the company had the most successful IPO of 1993, achieved the No. 1 ranking in 8-bit microcontrollers in 2002 (and still No. 1 in 2015), and recorded its 103rd consecutive quarter of profitability in June 2016.

GlobalMed is the worldwide industry leader in connected health delivery systems. The company has 2,400 installations in the VA Healthcare System, enabling veterans to see their physicians without traveling long distances to a medical center. GlobalMed’s systems are installed in the White House, Camp David, Air Force One, Marine One and in presidential motorcades for use by the president and White House staff.

TLG is one of the nation’s first education management companies and a pioneer in the charter school industry. TLG has been operating tuition–free nonprofit charter schools since 1996. TLG current operates about 60 school sites in Arizona, Florida, Indiana, Michigan and Ohio. The organization strives to improve life changes for children, under the founding philosophy that they believe every child can and will learn regardless of ethnicity, economic or educational disadvantage.